This month saw the release of my first full-length novel Quietus in both digital (via Kindle) format and as a traditional paperback.

After several contract offers with 'so called' Vanity Presses promising me full marketing and production of my novel in approximately 280 working days and with only a downpayment of £2,500 minimum, I decided to go it alone. Several presses are yet to get back to me, such is the laborious process of submitting in this day and age (and the amount of 'new writers' out there), but this meant I could have my book available on Kindle in a matter of hours and in print within days. Pretty amazing considering the book took about 3-4 years to write!

So after playing around with the cover design which would involve a photo a specifically took for this purpose, I then got on with the formatting and was ready to go: 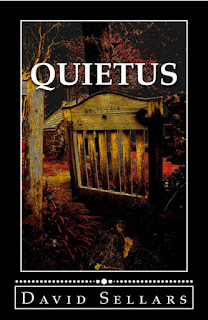 To date I've sold just over 50 copies and each sale brings a smile to my face.

I can access sales figures instantly via createspace (for the paperback version) and Kindle Direct Publishing (KDP) for the digital version - the geek in me has always liked statistics and reports!! I've also received five reviews so far on Amazon, all of which have been extremely positive.

If you have read Quietus and are reading this, please leave a review, it would be very much appreciated as the more the book is reviewed, the more substance it has.

I was also interviewed for the Jersey Evening Post, our local newspaper, which has a daily readership of over 52,000: 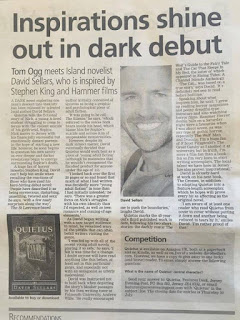 Again, this interview and review was very positive and contributed to a small spike in sales and visits to my website: www.davidsellars.com.

So what's next? Well I've been busy over the last couple of months doing some courses which I won't bore you with, but the next novel, The Crosses (working title) has been heavily brainstormed and the first tentative words have found their way to the page.

Quietus was a real learning experience and I now know where I wasted a lot of my time in writing it. I was very much someone who had to edit as I went along, for which now I realise was a completely pointless exercise and probably added a year to the whole process (yes really!!).

For The Crosses, I will write without reservation and see how the first draft comes out - I know the story is likely to chop and change when being written, but if you want a quick idea about the theme, well let's just say it centres around a small island in the English Channel...facing a very different kind of armageddon.

Oh and the likelihood is that it will be a trilogy of sorts, but with each book a standalone read. Let's see what the central characters Sam, Devon and Jenny decide...


As Stephen King would say: "Thank you, constant reader."

Posted by Unknown at 9:02 AM No comments: